Got just $2? Try Transition Matrix to know whether your numbers are worth it!

What is a transition matrix tool?

The transition matrix is a tool for detecting patterns in the sequence of numbers drawn from a lottery machine. It is a variation on a frequency analysis which considers the ball drawn immediately before the current ball. One key lottery assumption is that any drawing is independent of the previous drawing. However, even major lottery commissions seem suspicious of this assumption. For example, the Texas state lottery commission conducts “pre-test” drawings immediately before official drawings. The stated purpose of these tests it to perform a version of frequency analysis, but it is notable that this “pre-test” prevents players from applying a transition analysis approach.


How does the transition matrix tool work?

As in other examples, we consider data from Missouri’s Pick4. Although there are a total of four machines in this lottery, we are focused on the first one. Since the Pick4 is a “numbers game” or “digit game,” each machine has ten balls numbered from 0-9 and only one ball is selected in each drawing.


Before we discuss the principles behind the transition matrix and how we might apply it to detect patterns, let's focus on how to read the matrix. First, notice that we have the numbers 0-9 along the horizontal and vertical axis. These represent the balls in the machine. The vertical axis represents the ball drawn in the immediate previous drawing. The horizontal axis represents the ball drawn in the current drawing. The value in each cell indicates the probability of drawing the horizontal value given that the last ball was on the vertical. For example, when ball 4 was drawn, ball 1 has been drawn next 2.7% of the time. 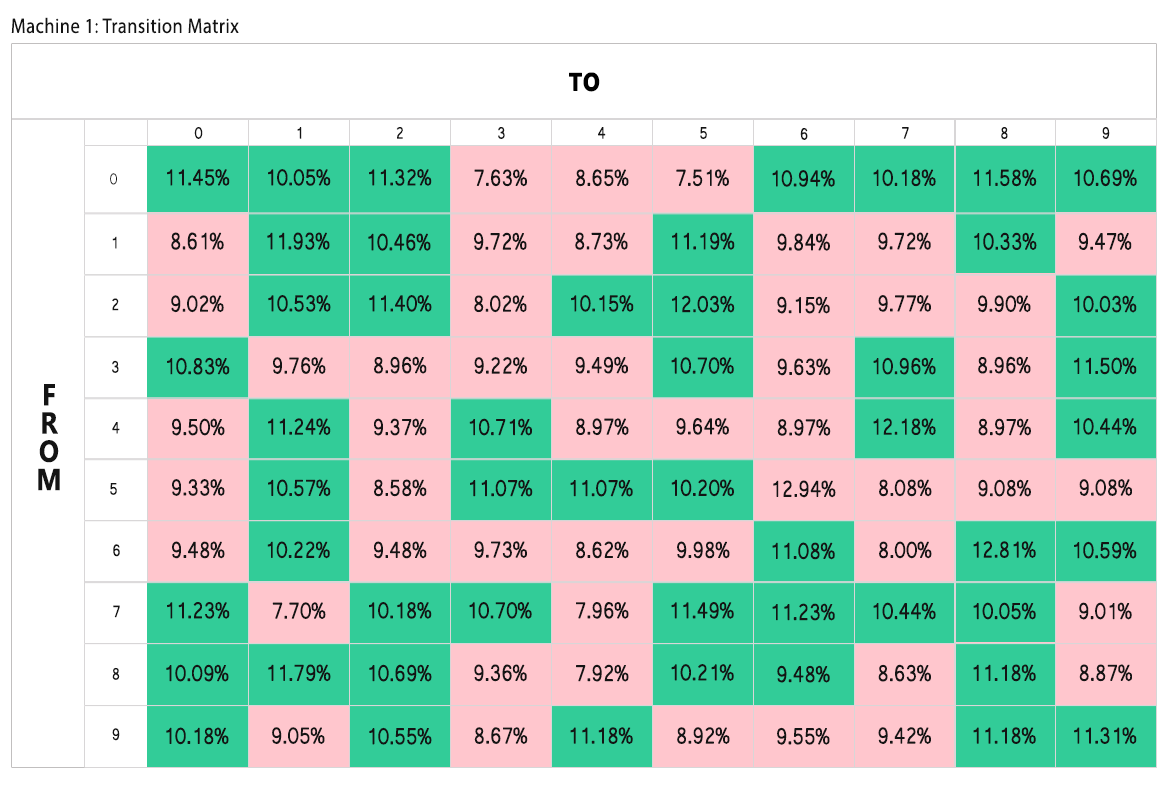 
The most immediate way to use the transition matrix is to make wagers based on the last drawing. For example, if ball 4 had been drawn from Machine 1, one might pick ball 6 for the next drawing because this transition has occurred 21.62% of the time.