5 Homeless People Who Won the Lottery

5 Homeless People Who Won the Lottery 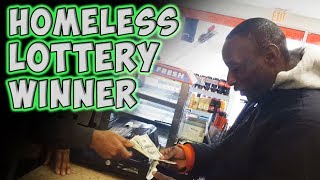 The lottery has changed a lot of lives. There is a surprising number of homeless people who got a lot of money overnight by winning the lottery. Imagine being homeless, at one of the lowest points of your life, living on the street, only to be blessed with a lottery win. That’s the story of the people in this article. read about the top 5 homeless people who won the lottery.

Michael Engfors, 61, had been homeless for 6 years. He was going through a divorce and had lost his business. According to the clerk at the gas station where Engfors bought lottery tickets regularly, he frequently played the lottery and often won a dollar or two. One day his consistency paid off and he won $500,000 on a $10 scratch-off ticket. He did not buy himself a home or car. Instead, he used that money to find his daughter who he hadn’t seen in 20 years.

Emily Reyes was homeless, desperate, and addicted to drugs and alcohol. She hit rock bottom when she landed in jail for stealing to support her addiction. When she was released from jail, she decided to pull her life back together. Therefore, she checked herself into a women’s shelter and clawed her way back to sobriety. She was celebrating six months of sobriety when she purchased a lottery and won $200,000. She planned on starting fresh with that money and also shared some of it with some other women at the shelter.

Grant Freeman lived in Nevada and he moved to Las Vegas because gambling is not legal in Nevada. He spent every penny on slot machines and, as so often happens, lost everything. He was forced to live on the streets and started begging. Even after that, he was constantly spending every penny on slot machines every night. His lifestyle took a toll on him and he hitchhiked his way to California. There he purchased two Mega Millions lottery tickets and won both. $8 on the first one and $180,000 on the other. Reportedly, he has since turned his life around and still buys lottery tickets once in a while.

Bonus Read: Teenage Lottery Winners and What They are Doing Now

Victor Herrara lived in Miami, Florida, and summer there is brutally hot. He lost his house while going through a divorce and he moved to his sister’s place with his son. But his sister’s apartment was cramped and had no air-conditioning. One night it was so hot that he couldn’t sleep. He went down to get some ice and instead ended up picking up a lottery ticket. He won $250,000 and, of course, the first thing he bought was a house with air-conditioning.

Laszlo described his life as, “always trying to plug holes, by making new ones.” He was a recovering alcoholic under a lot of debt. He was homeless for 7 years when he stopped at a train station on his way to Budapest and spent his last few coins on a lottery ticket. He won 636 million Hungarian forints (approximately $2.5 million). No, he did not but a big mansion or fancy car, instead, he donated most of it to the homeless shelter he and his wife had lived in and paid off his debt.