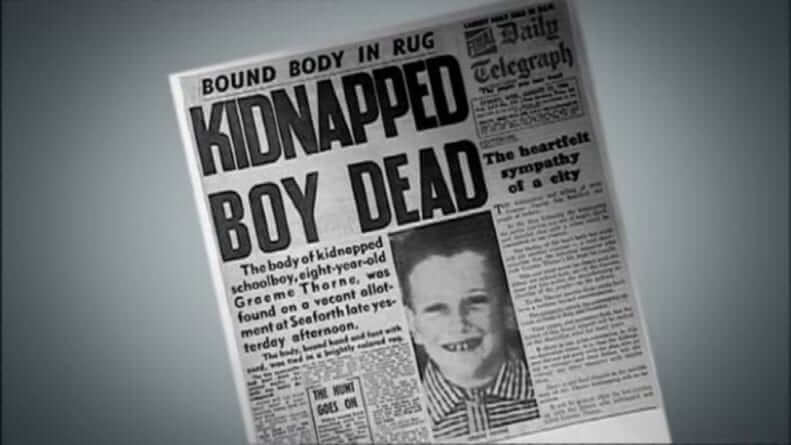 Graeme Thorne, an 8-year-old boy from Sydney, Australia, became the victim of a greed-fueled crime in 1960, that captivated the nation and changed lotteries forever.

It was Australia’s first-ever child kidnapping case. The abduction of Graeme Thorne for ransom was fueled solely by greed. The kidnapper targeted the Thorne family’s only son because the family had just won a lottery jackpot and the kidnapper wanted to get his hands on their winnings.

Just like any other happy family, Thorne's family consisted of Bazil Thorne, his wife Freda, and their 3 kids: 8-year-old son Graeme, Cheryl, and Belinda.  They lived in a rented house in Bondi, a suburb in Sydney. Bazil worked as a traveling salesman.  Their eldest child, Cheryl, had a disability and was permanently institutionalized. Bazil played lottery 10 of the Sydney Opera House on June 1, 1960. After that, he was contacted by a reporter and learned that he had won the £100,000 first prize, roughly equivalent to $3 million today.  The family gained instant fame.

At that time, nobody really worried about protecting the privacy of lottery winners. It was routine to publish the pictures, names, personal details, and winning stories of winners on newspaper front pages with big headlines. Thorne’s big win was no different and was published on the front page of the local newspaper with his identity, private details, address, and even the date he would claim his winnings.

Their happiness did not last long. 5 weeks after their win, the story turned into Australia’s most infamous child kidnapping case and eventually ended with the killing of Graeme Thorne.

Graeme Thorne was on his way to meet a family friend, Phyllis Smith, before going to school on July 7, 1960, at around 8:30 AM. It was a part of his daily routine but on that morning, he failed to show up. This raised concern and Smith started searching for Graeme at his home and school. She also went back to their usual meeting spot to check a second time. Unsuccessful search attempts only raised the family’s concern. Eventually, Freda Thorne contacted New South Wales Police for help.

A missing person’s report was filed and police officer Sergeant Larry  O’Shea of the Bondi Police arrived at the Thorne residence within an hour. Not long after, they received a call that said,

Police started their investigation immediately and launched searched operations around Graeme’s school and other nearby areas. They started asking questions to the neighbors to turn up any lead they could find. Later that day, they held a press conference and appealed for the public’s help in finding the young boy. Volunteers joined search operations launched to find the young boy. But all efforts were in vain.

Where was Graeme found?

After Australia’s biggest manhunt, and following various leads, authorities eventually discovered what happened to the boy. It was a dark day for the Thorne family when they found the body of Graeme wrapped in a blanket and wedged under a rock. He was still dressed in his school uniform and a scarf had been used to prevent him from screaming.

His body was discovered by Philip Wall and Eric Coughlan, both aged 8, and their fathers. They were Graeme’s playmates from the neighborhood. An autopsy later confirmed the exact reason and time of the death. Graeme died within 24 hours after his kidnapping and the cause of his death was either a blow to his head which fractured his skull or asphyxiation due to being gagged or a combination of both.

After receiving the body and releasing the details of the case to the public, the police were eventually tipped off to the home of Stephen Leslie Bradley, a Hungarian immigrant. He lived in a nearby suburb, Clontarf. On October 3, when police reached Bradley’s home, it was empty. After various efforts and investigation, Bradley was located and prosecuted for his crimes. On March 29, 1961, he was sentenced to serve life in prison. He died in prison on October 6, 1968, from a heart attack.

The Thorne kidnapping was a highly publicized case that shook Australia to its core. After this tragic tale, officials made amendments to Australian laws to include harsher punishments for kidnapping.  Australian Law now allows lottery winners to claim their lottery prizes anonymously. Even in the US, some states allow anonymous prize claims and assure privacy protection to lottery winners.