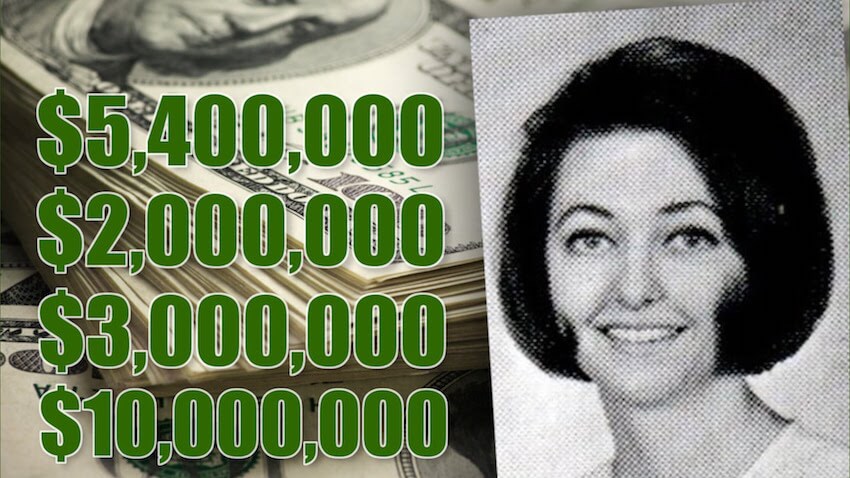 From 1993 to 2010, Joan Ginther of Bishop, Texas won $20.4 million in four different multi-million prizes.  After an initial lottery prize, Ginther, a Ph.D. from Stanford started making large purchases of high-dollar scratch-off tickets.  Despite her fantastic winnings, Ginther was never investigated for fraud and we are left to wonder how she achieved her success.

There are suspicions that she might have had inside help but no such evidence was ever found. After the McDonalds Monopoly scandal, most lottery commissions switched to a patented encrypted software system which eliminated human intervention even before Joan Ginther won a major scratch-off prize. This system means that nobody can tell which ticket seller has the winning ticket until it’s been scratched off. Joe Bennett, vice president of game development for Scientific Games, also believes that she didn’t have any inside help.

The most common theory is that Joan Ginther achieved her legendary winnings by “Cracking the lottery code”. It is unlikely that she would know the prize-distribution and shipping patterns of individual stores (partly due to the encryption discussed above).  Also, she purchased most of her tickets from the Times Market in her hometown of Bishop, Texas.  This suggests that she had not reverse-engineered the ticket distribution process.  If anything, she made the tickets come to her by purchasing a large number of tickets, triggering massive reorders. At that time, Times Market was the number one selling ticket-seller among all Texas retailers (despite being in a town of 3,100 people).

Joan Ginther certainly didn’t use data-gathering and analysis to win millions. Experts argue that there were no patterns that would have provided any mathematical or combinatorial solutions. Mostly her winnings indicate that she won because she purchased an astonishing number of tickets. If anything, Ginther was aware that Texas had one of the most generous scratch-off systems anywhere in the nation.

In 2011, the article - "The Luckiest Women On Earth" was published. In this Nathaniel Rich, speculated that Ginther might have cracked the algorithms or the mathematical rules on how major prizes are seeded in each lottery game. And perhaps she might have analyzed hundreds of tickets to get there! And if she was aware of the source of information about shipping patterns, she could also predict where the winners would land.

It has also been suggested that she picked the right time to play because she always played on days when fairly higher prizes were won. But Bennett also scraped the idea of optimal timing because according to him “every game is unique in what we call the shuffle.” Therefore, according to him, no such trick exists.

On final approach that is associated with the winnings on the scale of Joan’s is “screening tickets”. If one can eliminate losers without scratching them off, the cost of playing plummets and you could ultimately turn a profit, even if you never found a top prize. The problem with this scheme is that it can generate a massive number of unscratched losing tickets to foist off on unsuspecting buyers. Residents of Bishop actually complained about Joan monopolizing all the tickets for some games which means this scheme is also not used by Joan.

So, what was happening?  How was Joan Ginther winning so much?  Read our next post to learn more.