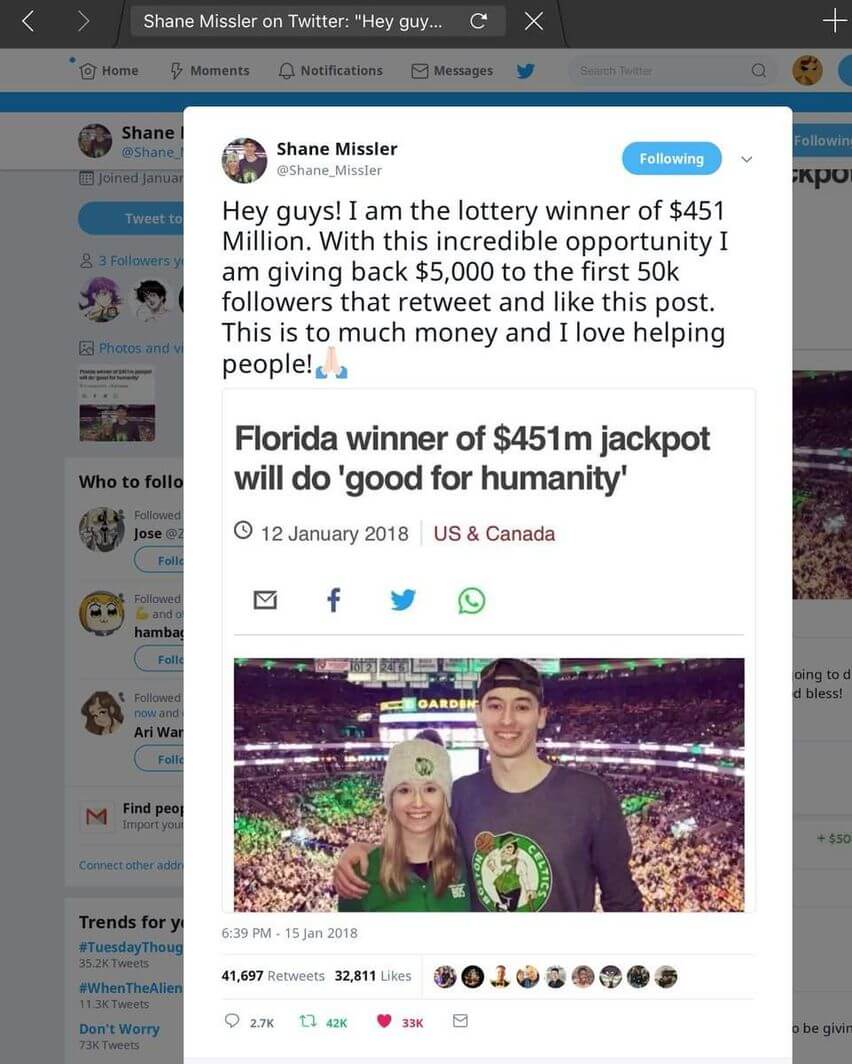 Shane Missler, a 20-year-old man from Florida, won a $450 million jackpot on January 5, 2018, and became a multi-millionaire overnight. When he learned about his big win, he posted a status on his Facebook page, “Oh. My. God.” Well, that was a genuine reaction that any of us would have had. But shortly after his win, a tweet went viral saying that he would give $5,000 to the first 50,000 people to retweet.

The question is: Is the tweet real? The answer is: No.

Someone is using a fake Twitter handle to pose as Missler and spread false news. The biggest clue that the account is fake is that it’s only been active for 15 hours before the tweet. This clearly suggests that the account was created solely to take advantage of the popularity of a multi-million lottery winner like Shane Missler. This is certainly not the first time a scam like this has surfaced.

Why do people do this?

Basically, this is a hoax message which promises large sums of money in exchange for liking, commenting, or sharing social media posts. You can easily find examples of this kind of scam by searching for the name of lottery winners. These “something for nothing” scams look “too good to be true” and they are. Shane Missler did say something about doing good for humanity but he never mentioned his plans specifically. He has also warned his followers about the fake accounts taking advantage of his popularity.

The post also stated that you need to sign up and purchase via a link to receive $2,000. Quite a weird one right! The link that was attached was an Amazon referral link and for some reason, it led to the purchase of Amazon fire stick. nd if you are a winner to $451 million, would you be interested in Amazon referral sales. That would generate some tiny amount of money. Quite pointless!

And mathematically speaking, he opted for a lump-sum payment option and received $282 million. According to the post, the donation would cost him $250 Million and after the deduction of taxes and everything he would be left with $211 Million. All of this just didn't make any sense!

Look for the following signs to spot fake accounts and bogus claims. It can help you avoid being scammed.

The Lottery Lab opposes all forms of lottery scams that undermine the credibility of the game.  We do everything in our power to offer accurate information and effective tools to help our users play the lottery; however, we never alert players to prizes or act as an intermediary in transactions. In the event that you come across such a scam, report it to us immediately. We’ll try to inform more people and spread awareness about scams.