The True Story of Stefan Mandel

The True Story of Stefan Mandel 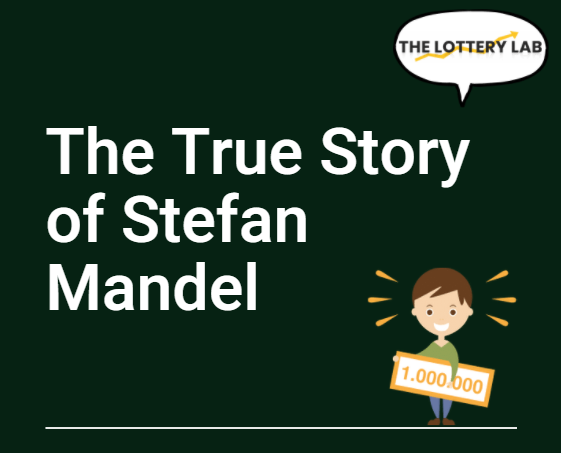 On February 15, 1992, a lottery syndicate generated massive media attention when they matched all 6 winning numbers in the Virginia State lottery. Not only did the syndicate win a jackpot worth $27 million, but the winner also managed to secure 6-second prizes, 132 third prizes, and 135,000 other minor prizes collectively worth another $900,000.  As word spread, people learned that the syndicate was organized by an Australian businessman named Stefan Mandel and that the syndicate had won 12 previous jackpots in Australia.

In the 30 years since this historic event, rumor, myth, and speculation have blended to obscure the truth behind such basic questions as:

Who is Stefan Mandel?

How did he orchestrate such an audacious victory?

What happened after this win?

The good news is that Mr. Mandel (now in his eighties) is preparing to publish a book that tells the full story of his adventures.  In dialogues with Mr. Mandel and his representatives, The Lottery Lab was able to separate legend from fact.  We hope you enjoy this preview of his fascinating tale.

Who is Stefan Mandel?

Stefan Mandel is an Australian businessman.  He was born in Communist-controlled Romania in 1940.  As a young man, he graduated with a Bachelor’s Degree in Economics and went to work at a state-controlled coal mining trust.

Like many people living behind the iron curtain, Mr. Mandel dreamed of a better life.  As the head of the mining trust’s transportation division, Mr. Mandel only earned 360 Leu (about $12 a month at the time or roughly $100 in today’s dollars).

In the face of these conditions, Stefan Mandel formed a small lottery syndicate with 4 people.  The group amassed a minor fortune of 6,690 Leu and set out to change their fate.  They used a system that Stefan Mandel had dubbed “the theory of combinatorial condensation”.  Armed with their startup money, a strategy, and a bit of luck, the syndicate managed to win!  After paying off expenses and dividing the prize between syndicate members, Stefan Mandel walked away with just over 18,000 Leu.  It would have taken him 4 years working at the mining trust to earn that much money!

With his newly improved financial condition, Mr. Mandel set his sights on fleeing communism and eventually living in a free, democratic country.  The year was 1966 and the Australian government offered favorable immigration policies so Mr. Mandel became an Australian citizen.

You might think that after leaving Romania, Mr. Mandel continued to play lotteries.  After all, his early breakthrough came from a lottery and almost 25 years later he would go on to win millions in lottery jackpots.  In reality, Mr. Mandel didn’t formally play lotteries for 15 years after immigrating to Australia.

How did Stefan Mandel Orchestrate his $27M Jackpot Win?

Readers familiar with The Lottery Lab Approach to Advantage Play will recall that the three elements of advantage play are:

When Stefan Mandel returned to lotteries, he took these principles to impressive lengths.

Like many of the most successful advantage players, Stefan Mandel actually identified multiple opportunities and combined them in his strategy.

The first opportunity is one that even casual lottery players often notice.   There are some progressive lottery jackpots that can grow so large that the jackpot can be worth more than three times the cost to buy a ticket with every possible combination.

Obviously, buying millions of tickets requires millions of dollars of cash on hand.  This is where Mr. Mandel’s business sense provided a solution.  Unfortunately, the sophisticated nature of Mr. Mandel’s plan led many bystanders to misunderstand and misrepresent what he was actually doing.

You see: Stefan Mandel was not a lottery player looking for backers, he was a salesman looking for a way to boost his sales.

In Australia, Mr. Mandle owned an insurance agency called Pacific Financial Resources.  In the early 1980s, the Australian government was encouraging citizens to save for their retirement by buying whole life insurance policies.  These insurance policies were underwritten by five of the nation’s largest insurance providers.

To understand how (and why) Stefan Mandel built his lottery fund, you have to understand a little bit about how insurance agents are paid.  When an insurance agent writes a policy, they are paid a flat commission by the insurance company.  Most insurance agents use these commissions to pay operating costs like advertising, office space, and employee salaries.  Obviously, if an agent can come up with a way to sell more policies, they can make a lot more money.

This is where Stefan Mandel’s lottery experience and business acumen came together.  He sold 2,500 insurance policies.  For each policy that he sold, he received a $4,000 commission.  Of the $20M generated this way, Mr. Mandel set aside $10M to establish a trust called International Lotto Fund.  The remainder, he used to pay operating costs.  He then operated the International Lotto Fund to scoop up lottery jackpots for the people who had purchased insurance policies from him.

One of the most misunderstood aspects of Mr. Mandel’s story is whose money was actually used to establish the International Lotto Fund.  In fact, it was his income which he had already earned.  He granted free memberships into the fund to people who had bought polices through his company.  Therefore, at no point in the adventure did an investor, insurance company, or the government have any money at risk.  Instead, people who had purchased life insurance policies through Pacific Financial Resources stood only to gain from their arrangement with Mr. Mandel.

On one hand, Stefan Mandel’s technique for winning a lottery jackpot was simple and straightforward.  On the other hand, the scale of the endeavor demanded a careful and sophisticated approach.

By the time that he set his sights on US-based lotteries, the International Lotto Fund had won 12 top prize jackpots in Australia.  Stefan Mandel and his team had worked out many of the logistical challenges.  While many of these techniques will be revealed in his upcoming book, Mr. Mandel has shared some of his secrets.

First, Stefan Mandel selected six states to target.  One of the key features of these states was that they each had a lottery with a progressive jackpot that had the potential to reach 3 times the cost of purchasing every combination.  Mr. Mandel, of course, had additional criteria that he applied in selecting his target lotteries.  One common myth is that he used “scouts” to collect information about individual lotteries (remember that this all happened in the pre-internet days); however, the astonishing truth is revealed in his book.

In each state, he planned to contract an accounting firm to pre-stage lottery playslips.  In Virginia alone, he hired 35 accountants to manage 1.7 million playslips.  They managed to generate this many playslips by using computer printers to fill out the forms.  Many people have speculated that Mr. Mandel used roustabouts to manage the lottery ticket purchases, but he was in fact careful to use accountants throughout the process.

On February 12, 1992, the Virginia Lottery announced a jackpot worth over $21M, and Stefan Mandel’s team swung into action!  They purchased over 7 million tickets (boosting the jackpot by $2.3M themselves).

On February 15, the syndicate won and Mr. Mandel sent the good news to his members in a short message, “One of our target lotteries did jackpot to our required level. We entered and we won.”

The story of Stefan Mandel and his lottery syndicate has had long-lasting impacts on the world of lotteries.  In many ways, the aftermath of this historic event highlights two important lessons for advantage players.

In the media storm that kicked off immediately after the International Lotto Fund’s victory, a false story circulated that the syndicate was involved in money laundering and other black-market operations.  This led to baseless speculation that the jackpot would not be paid and that the “investors” had been defrauded.

As is common in high-profile lottery wins, authorities became involved; however, their investigations lasted only a few weeks.  Despite urban legends that claim the investigations lasted for years, Mr. Mandel’s commitment to using legitimate accounting firms helped quickly dispel any questions.

Virtually every aspect of Stefan Mandel’s arrangement was misrepresented at some point.  Even the obvious and necessary step of liquidating the jackpot has provoked uninformed rumors.  At the time of his win, the Virginia Lottery was only paying jackpots as annuities.  Clearly, for the International Lotto Fund’s business model to work, they needed to cash out the annuity.  However, some have claimed that when Stefan Mandel did so, that he was somehow doing something inappropriate (even though companies advertise this service continuously on daytime television).

When everything was complete, each of the 2,500 syndicate members received about $1,400.  Here is another situation where ill-informed journalists misrepresented the truth.  They sparked outrage by claiming the $4,000 commission explained above was actually cash that the members had placed at risk.  By this logic, it appeared that syndicate members had lost money.  In truth, the commission didn’t belong to the syndicate members and the $1,400 was in addition to what they earned through their insurance policies.

The implications for lotteries affect the ways we play today.  First, most lotteries specifically forbid the use of computer-printed playslips.  Players are required to manually fill out playslips.  Second, lotteries have instituted a number of methods to prevent players from buying tickets in bulk.  For instance, ticket sales for an individual lottery vendor are sometimes capped based on historical sales.  Finally, many lotteries that generate multi-million-dollar jackpots have far more than the 7 million possible number combinations that the Virginia Lottery offered.

Perhaps the most important lesson comes from Mr. Mandel’s own experiences.  Becoming internationally known for winning 14 lottery jackpots attracts more than its fair share of negative attention.  Mr. Mandel was forced to withdraw from playing the lottery due to extortion letters he received and threats to his family.  Syndicate members were disappointed because they had expected to continue to receive lottery winnings.  Every personal up and down becomes fodder for lurid lottery tales.

After all these years would Stefan Mandel do it all over again?  Does he have anything he wishes he has done differently?  And most importantly, does he have any secrets to share with others?  We all look forward to the publication of his book!